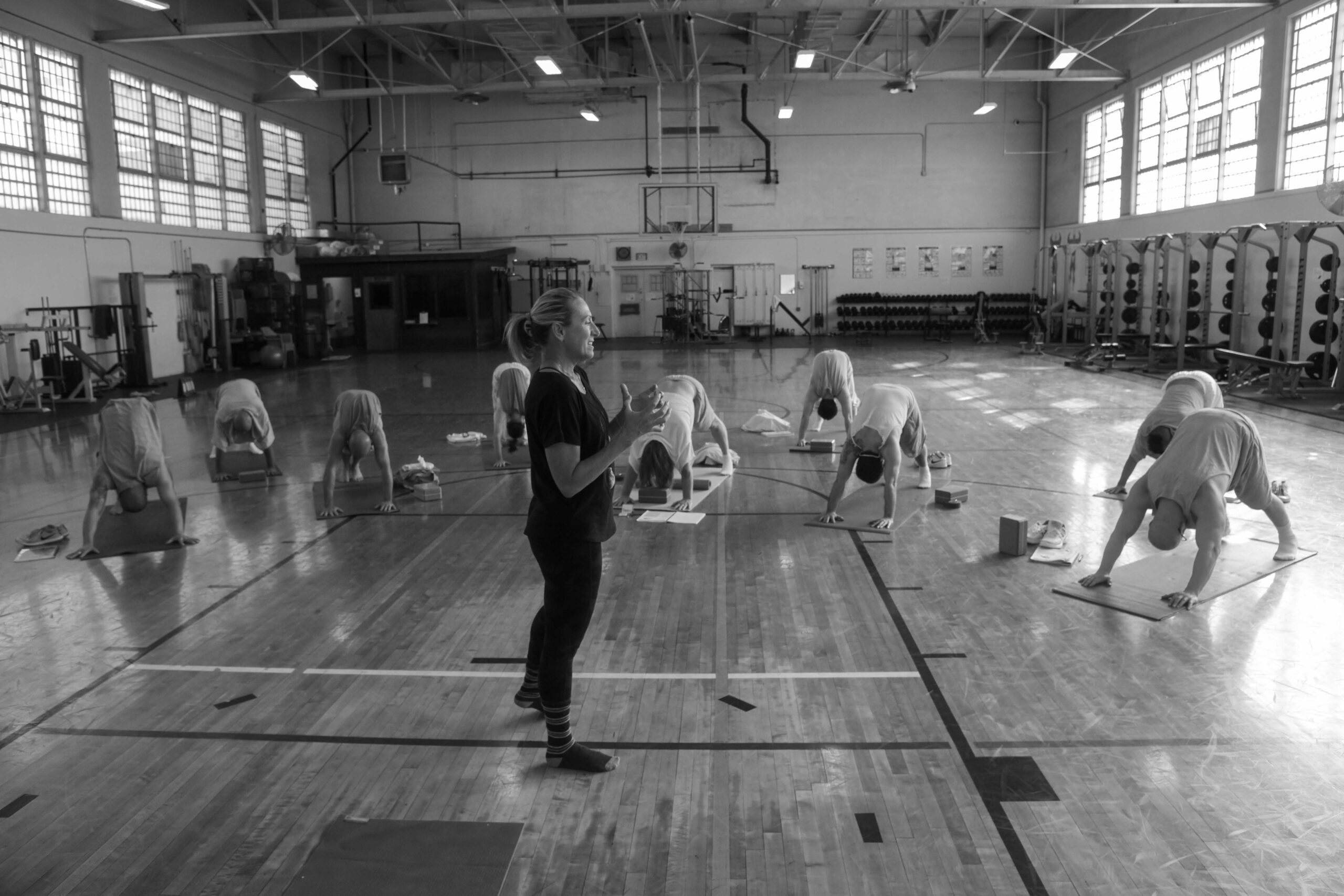 Denise Druce leads inmates in a Yoga class in the Wasatch gym at Utah State Prison.

As the two dozen or so men put their bodies into positions that for some may feel awkward or unnatural, Denise Druse reminds them – constantly – to forget what many learned as young athletes.

“Don’t push through the pain!” she calls out, repeating the mantra over and over. (She concedes later that the sentiment is “very prevalent in this gym.”) Her voice easily carries in the vaulted, antiquated building, lit primarily by pale winter light streaming through a bank of windows raised high above the floor. They are surrounded by the usual accessories found in such places: weights, exercise machines – and correctional officers standing watch.

This is yoga, prison style.

“Power yoga,” says Druce, who began the program just five weeks ago in the Wasatch section of the Utah State Prison. “At first, I started to bust their tails to get their attention. Now, I’m dialing it back. But they bring that same intensity to soft yoga.”

Druce operates Yoga Assets, which trains yoga instructors. She is also president of YogaForward.org, a non-profit that is sponsoring 10 inmates at the facility to become class leaders. The program follows a similar one she has been teaching for several years at the Timpanogos Womens Facility located less than a mile down the road.

But while the programs are similar, Druse says the students are not.

Once the class starts at Wasatch, there is no chatter among the attendees. No easy smiles. While following Druce’s admonition to listen to their bodies, the participants are laser focused on their tasks.

The room is nearly silent, a shift from the usual squeak of sneakers during basketball or the clanging of weights on the floor. When Druce rings two tiny chimes at the end of the session, they fill the room with sound.

And yet, many say that it is a positive environment and at the end of the class, they feel a change.

“Someone invited me (to the class), and afterwards, I felt different the rest of the day,” says Erik Harding. “So, I kept coming back.”

For Rodney Liti, it was a chance to expand his workout routine – at first.

“I wanted to find an alternative way to exercise and get stretched out,” he says. And now? “I feel more in tune, more balanced spiritually, emotionally and physically. I love this class.”