Utah Code 77-27-5.4 directs the Board of Pardons and Parole (Board), in collaboration with the Utah Department of Corrections (Corrections) to establish an Earned Time Program that reduces the period of incarceration for offenders who successfully complete approved programs designed to reduce recidivism.

Individuals with a life without parole sentence or who have been ordered to expire a life sentence by the Board are not eligible. The Board may order the forfeiture of earned time credits for a major disciplinary infraction, new charges, or if the Board sets a rescission hearing.

There may be circumstances when the previously ordered release date does not allow enough time for the full four- or eight-month time cut; however the Board will approve as much of a time cut as can be given while still allowing time for transition services (see Utah Code 77-27-5.4(3)(a) included in the Addendum below).

Some individuals do not have a release date either because they have not had an original hearing, or they are set for a re-hearing. If the individual completes a qualifying program, the Board will acknowledge the completion and consider the appropriate adjustment at the individual’s next hearing

The following is the list of programs approved for mandatory credit in the Earned Time Program. Approved programs must maintain high fidelity and performance standards, or they are subject to removal from the approved list. This list supersedes all previous lists. The effective date refers to the date the program was approved. Individuals who successfully complete the program on or after the effective date are eligible for Earned Time credit, assuming the other conditions of the statute have been met. 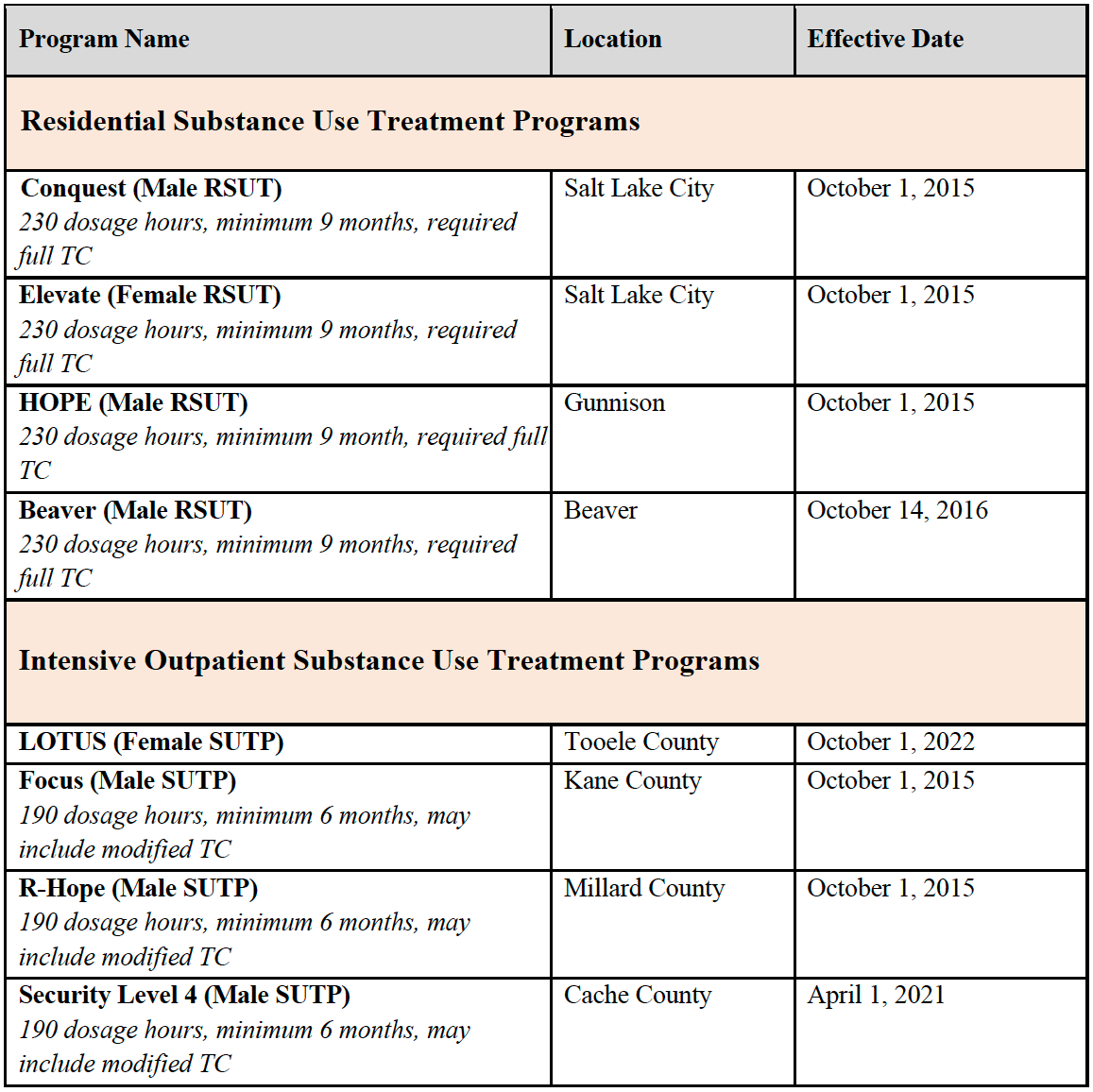 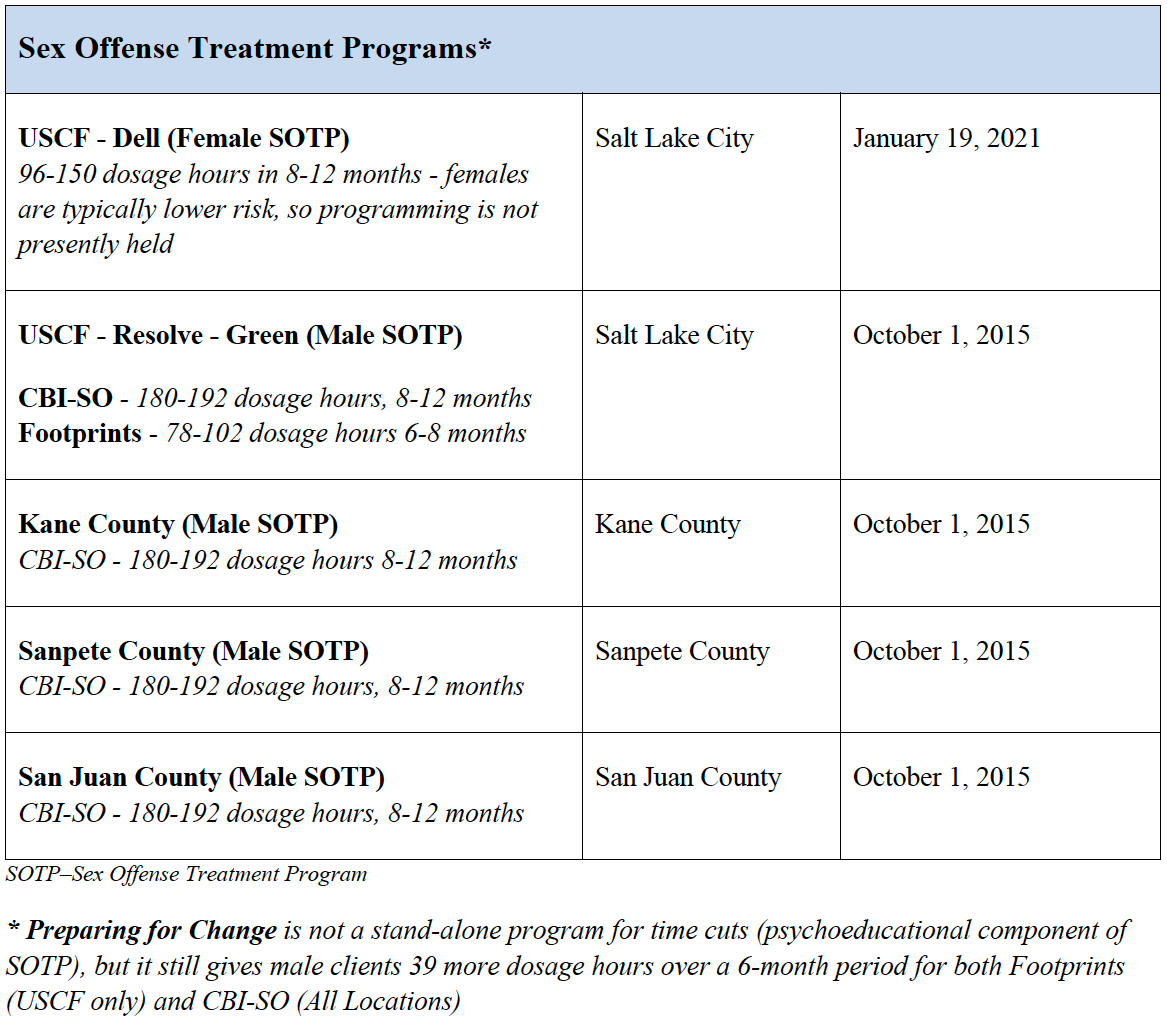 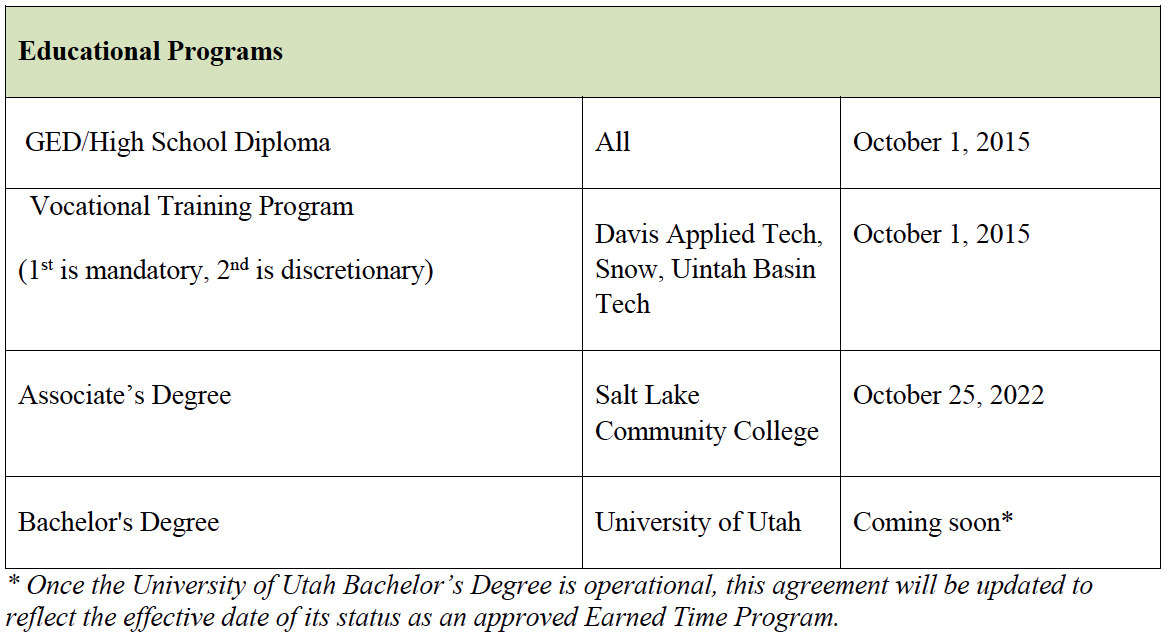 who successfully complete specified programs, the purpose of which is to reduce the risk of recidivism.

(2) The earned time program shall:

(i) are approved by the board in collaboration with the Department of Corrections; and

(ii) are recommended programs that are part of the offender’s case action plan; and

provided under Subsection (2)(a).

(a) whose previously ordered release date does not provide enough time, including time for transition

services, for the Board of Pardons and Parole to grant the earned time credit;

(b) who have been sentenced by the court to a term of life without the possibility of parole;

(c) who have been ordered by the Board of Pardons and Parole to serve a life sentence;

(d) who do not have a current release date; or

(e) who have not met a contingency requirement for release that has been ordered by the board.

(6) The board shall collect data for the fiscal year regarding the operation of the earned time credit program,

(a) the number of offenders who have earned time credit under this section in the prior year;

(b) the amount of time credit earned in the prior year;

(c) the number of offenders who forfeited earned time credit; and

(d) additional related information as requested by the Commission on Criminal and Juvenile Justice.

(8) To the extent possible, programming and hearings shall be provided early enough in an offender’s

incarceration to allow the offender to earn time credit.