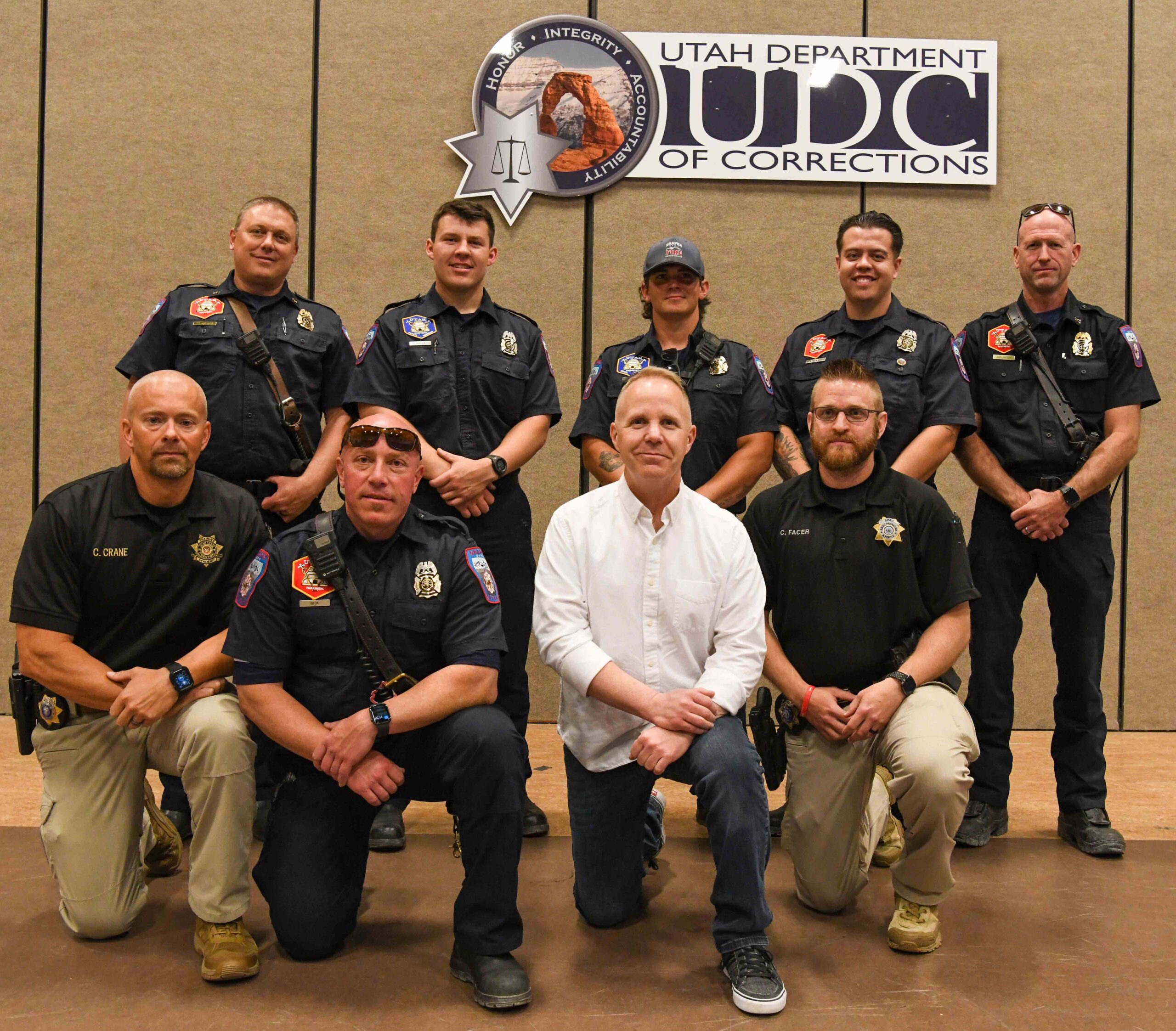 24 May Heart attack survivor thanks rescuers

On the day before their graduation from the Utah Department of Corrections Pre-Service Academy, Class 318 gathered in the gym at the Fred House Training Academy.

There were tears of joy. A small ceremony was held. People spoke about commitment. They offered “thank-yous” to those that provided support. Hands were shook. Hugs were shared.

This is a feel-good story. But it’s not the one the group expected when the class started nearly four months ago. It’s not about the cadets that survived training.

It’s about the one that survived.

“From the heart, thank you,” said Richard Shuck, a 55-year-old recruit from the Weber County Sheriff’s Department. “The depth of my gratitude, I can’t express.”

He was speaking to his former classmates, training academy instructors and members of the Draper City Fire Department – all who had a hand in saving him after a massive heart attack following a training run nearly took his life.

On the fateful day about seven weeks into training, the cadets were completing what many consider the toughest part of physical fitness test: a timed 1.5-mile run. Shuck finished in the allotted time.

“We were getting ready to go to class when he passed out in front of us,” said Sgt. Justin Ivey, a member of the training academy staff who witnessed the incident. “Then it looked like he had a seizure.”

At that point, Capt. Christopher Crane of the training academy and Adult Probation and Parole Agent Chris Facer – who was there to support his wife, a member of Class 318, in her quest to join the UDC – began life-saving measures. While the two did CPR on Shuck, Ivey called 9-1-1.

Despite the traumatic nature, several cadets found ways to help.

“(The class) did an awesome job. They were amazing,” said Ivey. “They wanted to help. They responded very well.”

Emergency responders from Draper Fire arrived and took over. They utilized a defibrillator device and were able to detect a heartbeat and other vital signs as Shuck was loaded into the ambulance. He was rushed into surgery soon after arriving at the hospital.

“I didn’t find out until he had made it through surgery,” said Ginny Shuck, Richard’s wife. “He’s getting better slowly, but he’s OK.

Joining Ginny Shuck were other family friends, like Maj. Gen. Michael Turley, Adjutant General of the Utah National Guard and Air National Guard who said he has known Shuck for 15 years. They listened as Draper Fire Battalion Chief Kevin Holt noted this was National Emergency Services Week and introduced those that were on the call that day. He also praised the UDC staffers, noting their efforts were key to the successful outcome.

So did Shuck, who recounted that doctors told him he had a type of heart attack known as a “widowmaker.”

“One of the nurses told me she had never seen someone survive one,” he said.

After a 31-year career in the Army that saw him retire as a Lt. Colonel, Shuck said he joined the Weber County Sheriff’s Department as a correctional deputy because “he wanted to be around people who cared.” On this day, surrounded by his rescuers, he thanked them for caring. Not just about him, but for others as well.

“I can’t tell you how much I appreciate what you did,” he said, “and what you do.”